2015 was yet another very successful year for our JG Layflat® pipe, which was at the centre of this year’s national promotion ‘Every Metre Counts’. 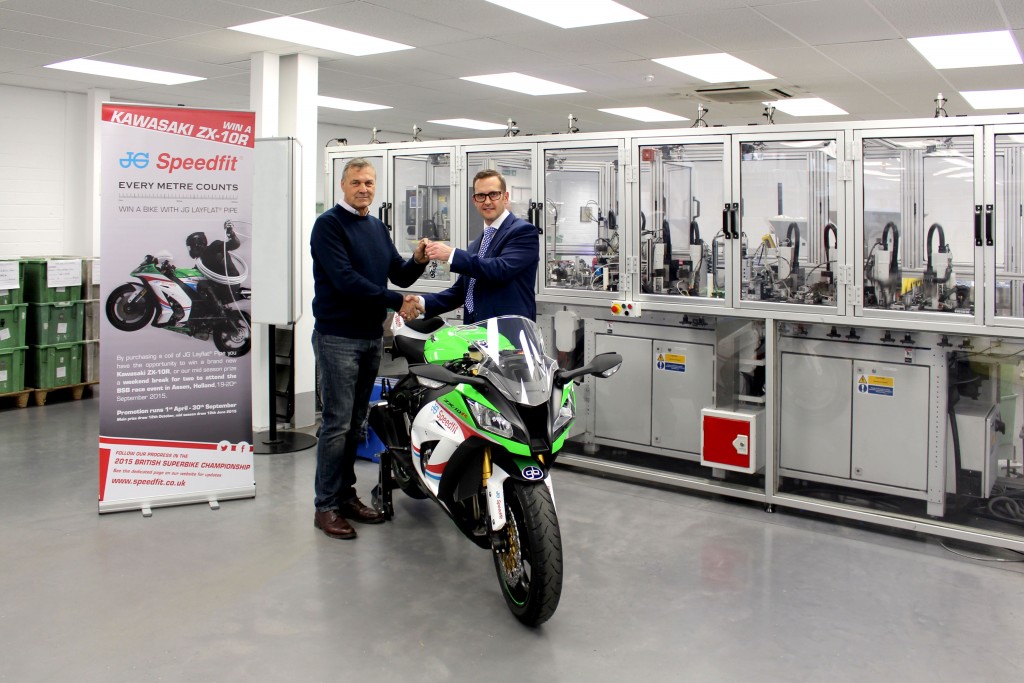 We are are delighted to announce that the brand new Kawasaki ZX-10R went to Mr Peter Howes from PGS Plumbing & Heating Ltd, who was presented with his prize on 20th October 2015, at our headquarters in West Drayton, London.

Peter was very excited to have won the Kawasaki bike and told us he couldn’t really believe it is true. He continued – “We have been installing Layflat pipe for a while now and it certainly proves to be better than the alternatives, it is really flexible and goes exactly where you want it to.”

Mike Riseley, UK Director of Sales, confirmed that the competition was a huge success and commented – “I am very thrilled to see yet another very exciting national promotion featuring our JG Layflat pipe. We received an incredible number of entries and I would like to thank everyone who participated.

I was delighted to learn that Mr Howes is a loyal customer using significant amount of our Layflat pipe and it was great to reward such loyalty with this fantastic prize.”

This year’s competition celebrated the fact that we are the official title sponsor of the GBmoto Kawasaki team competing in the 2015 MCE British Superbike Championships, who came third in the overall ranking this year.

Being a keen race fan, Peter was very excited when receiving the bike, as it is a road-going replica of the JG Speedfit Kawasaki bike, which competed in the 2015 BSB Championships.

We are very happy to see that our JG Layflat® pipe was yet again the reason for a lucky installer to be awarded a prize of such a high value.

Benefits of the JG Layflat® pipe

The JG Layflat® pipe allows greater control and ease of movement making it possible for a single person to meander and route the pipe through joists and tight spaces.

Transporting the JG Layflat® pipe is hassle-free in comparison to other copper equivalents, is very light to carry and compact enough to be loaded into a small space whilst moving from the shop to the construction site. Regardless of whether you are using a 25m or a 150m JG Layflat® coil, the pipe is consistently easy to remove from the packaging.

Thanks to the inbuilt barrier layer, which prevents the ingress of air, as well as the smooth inner surface of the JG Layflat® pipe, a permanent unrestricted flow through the system can be assured as no limescale or corrosion would occur within the lifetime of the product.