Following a hugely successful 2016, JG Speedfit has executed ambitious plans to expand its nationwide Sales and Technical support network, in order to work more closely with merchants and plumbers throughout 2017, creating a much higher demand for the Speedfit range.

The leading manufacturer of push-fit fittings has enjoyed one of its most successful years, giving away over £30k worth of prizes through product promotions, becoming a member of the Builder’s Merchants Federation, as well as launching significant developments throughout its product range. The company has secured a range of high profile projects, including supplying a JG Speedfit system to a new East London housing development, and contributing underfloor heating for a new sanctuary built within Birmingham Children’s Hospital.

As JG Speedfit prepares for an even more successful 2017, it has already restructured its sales team to be more visible to the merchants & installers and enable effective execution of the sales & marketing strategy. The company has appointed Phil Lacey to the role of National Account Manager, where he will strengthen the Account Management team and advance relationships and drive sales with stocking partners. Oliver Horne has been employed as Regional Sales Manager and will take on responsibility for the North West. James Steadman-Young has been promoted to Regional Sales Manager role, where he and his team will drive sales and build relationships in the company’s newly formed central division. Jim Burge has taken on a technical sales role for East Scotland where his customers will benefit from his technical experience gained during his time as a qualified plumber. The restructuring is all part of the company’s mission to work more closely with merchants and end users of its push-fit products.

The company has also employed a number of successful graduates to Area Sales Manager roles, one of them being David McCullough, who is appointed as Area Sales Manager – West Scotland. David graduated from the University of Strathclyde and will look after West Scotland, a region where the business anticipates further demand for its products. 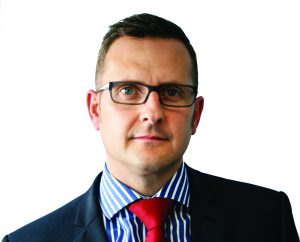 Looking ahead to 2017, Mike Riseley, UK Director of Sales at JG Speedfit commented: “Next year is already looking exciting for JG Speedfit, with our new infrastructure now in place. We are anticipating another great year in 2017 with further possibility to expand the sales & technical team headcount in support of the effective execution of our stockist and demand creation strategy, whilst further educating our customers on Underfloor Heating & Aura Smart Controls.”